The days of a single PC per person have been long gone. It has become common to interact with multiple computers on a daily basis. When I was in college, I would use computers at labs, classrooms, and a library. Since joining the workforce, I have been using a couple different machines at my workplace. I also have three computers at home. It is reasonable to expect to be able to access personal data from any computer and any location.

Emailing text
Often times, I would run into some text that I would like to save for later reading or printing. In situations like these, I would email it to myself. Later on, I would have access to the text from any machine that can access Gmail.
There are two limitations to this approach. The first one is inbox pollution. I prefer to keep the inbox clean. The second issue is inability to edit emails. When I would realize that I made a mistake, I would need to send another email to myself and delete the previous one.

Emailing files
Recently I needed to transfer certain files from my home machine to the work machine. I created a power point presentation at home that I need to open up on the conference room’s computer. Emailing the file to myself worked great. Although I did end up sending several emails, each one being an updated revision of the presentation. Every time I would send a new revision, I had to delete the old one from the inbox so that I would not mistaken the most current for the old one. This approach works for most file types including zip files. Unfortunately, there some file types (executable) that are blocked by Gmail for security reasons. When one tries to email an executable file, he is presented with the following dialog:

The “Drafts” folder
Transferring text and files between computers using Gmail introduces few annoyances that can be mitigated utilizing “Drafts” Gmail feature. It is one of the best and underutilized Gmail features in my opinion. When composing a new message in Gmail one can save it for later editing. The message is stored in the “Drafts” folder (actually it is a label). It is obvious that draft messages, which can be edited and saved, are ideal for simulating a temporary global storage for text and files that can be accessed from any machine anywhere capable of opening a Gmail account. I am going to make up a term and call it a “cloud clipboard”. I mentioned above that Gmail does not allow sending executable files. It is natural to ask a question: what kind of a cloud clipboard this is; it cannot even temporarily store executable files. It can! Let me repeat that again. Gmail allows uploading and storing executable files in draft messages. It does not allow sending those messages. That is irrelevant since the cloud clipboard’s purpose is only to store the data and not exchange it.
I customized the appearance of my Gmail account in order to make the cloud clipboard more user friendly. Gmail has a lab feature called multiple inboxes. This means one can display contents of five labels besides the inbox one. I decided to display only “Drafts” label below my inbox: 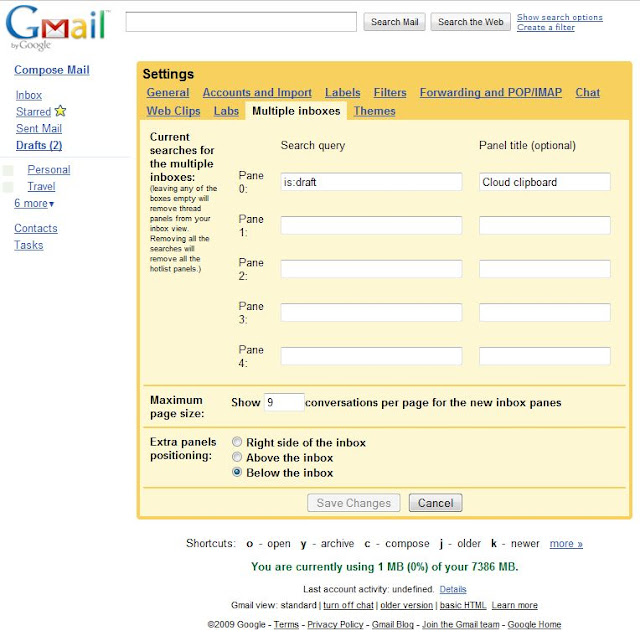 The setup allows me to see what I have stored in the cloud clipboard as soon as I log into to Gmail. 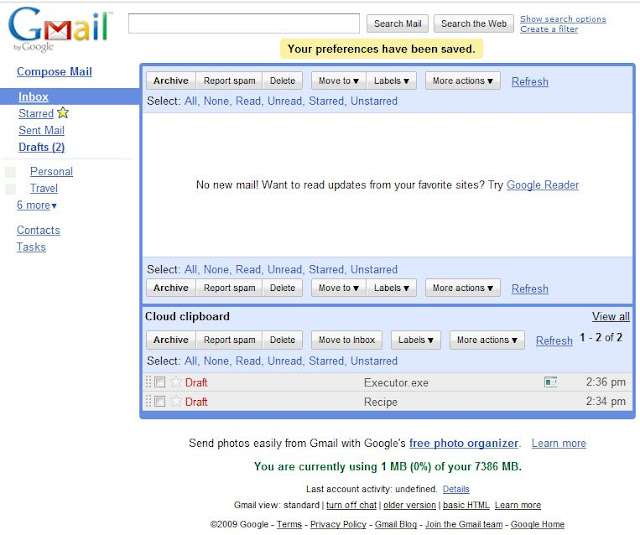 Clicking on any of the messages labeled draft opens up the message for editing. The content of the message can be modified. Files can be added, removed, and opened. The message that is not needed anymore can be discarded; keeping the inbox and drafts folders clean.

Conclusion
Some sort of cloud clipboard has been long over due feature by Google, Microsoft, and all other relevant players. I am aware of possible alternatives such as Evernote or DropBox. They all suffer from shortcomings. They require another set of credentials for logging in and having to open another browser tab. Even if I was not lazy to log in, I could potentially not have access to their websites because of company policy at my workplace.
Gmail has been looking more like a cloud desktop every day. It already supports IM, calendar, tasks, and documents. I hope Google considers developing a true cloud clipboard.

Real developers use a keyboard, not a mouse. Next week in “Visual Studio must know shortcuts” I will show what Visual Studio specific keyboard shortcuts make me a more productive developer.