Visual studio 2005 and later versions support Team explorer integration for Team foundation version control. Visual studio 2003 or any other applications depend on Visual Studio Team System 2008 Team foundation server MSSCCI provider for Team foundation version control integration. Unfortunately, the provider does not work well with other components it depends on. It does not provide meaningful error messages either. An issue I encountered produced a useless error message.
Consuming the MSSCCI provider
Once the provider has been installed, it can be consumed by any application that supports it. In order to configure an application to use MSSCCI, a user would typically select the MSSCCI provider which would then display a dialog where TFS server can be added and a protocol (HTTP or HTTPS) can be selected.

Once the server has been selected and OK button is clicked, a new dialog should open displaying the TFS branch. 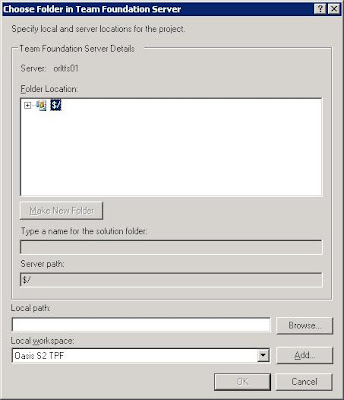 Instead, in some cases the following error dialog would display:

It is worth mentioning that I faced this error on Windows 2003 server only. I have not seen it on Windows XP. I had two machines, one with XP that worked flawlessly and another one Win2003 that would display the error. The troubleshooting process was long and exhaustive.
Troubleshooting
First, I examined the event log. There were no clues to be found. As usual with these kind of cases, I turned to invaluable Process monitor. Process monitor did not report any unusual information either. Since MSSCCI uses a webservice to connect to the TFS, I automatically opened up Fiddler and started sniffing the HTTP traffic. I noticed that it was reaching the TFS server, but the traffic would just suddenly die out. That was not much help. Another engineer suggested turning on the MSSCCI tracing. Tracing showed similar information to Fiddler’s. The webservice requests would die out without any error messages. I tried reinstalling Visual Studio SP1, TFS power tools, and MSSCCI provider to no success.
The solution
Finally, the engineer mentioned earlier suggested certain order of uninstalling the software components and reinstalling them again. Here is what I did:

This particular sequence of the steps eliminated the issue. I am still not sure which component was the culprit. However, I am eager to find out. If anyone has any idea, please share it in the comments.