This post has been long overdue. I have published my first Windows Phone 7 app last January. Ever since, I wanted to share more information about the app. It is called GPA & Grade Calculator also known as GGCalc in my house. 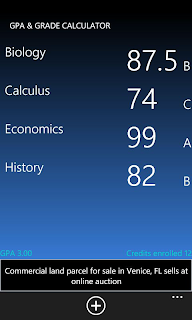 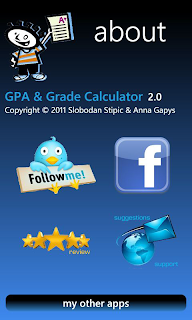 My wife, Ania, is a college student who had a need to keep track of her grades and calculate her GPA. She asked me if I could write an app that could help her out. I agreed to take on the challenge. Considering that it was my first WP7 app and that I had never done any Silverlight or WPF development before it was an ambitious undertaking. After 6 weeks of development and testing it was finally published on Marketplace. Ania played a crucial QA and user role. Her non-developer background helped out in bringing a different perspective to the project which made the app more user friendly. Ania recorded a demo video of the first release.

Marketplace and usage performance
Since the initial release in January, I have released an update in April that has addressed some bugs as well as introduced many new features the users have requested. The app has done quite well in Marketplace. It has been ranked in top 10% consistently with 3669 total downloads in the first 5 months. As you can see on the graph it averaged between 20 and 25 downloads a day.

The number of downloads can be misleading. It does not provide the true picture about the active user base. Some people may install the app, play with it a little bit, and then uninstall it. The more meaningful number is the number of daily users. Since I did not implement the app analytics until the second release of GGCalc, the data on the graph represents only the period between 6 April and 6 June.

Despite the large number of total downloads and 20-25 daily downloads, there are only around 40 active daily users. If everyone who downloads the app also ran it the same day, then we can conclude that there were between 20-25 new daily users and 15-20 existing ones.

Ad performance
The high Marketplace ranking may be attributed to the fact that GGCalc is free and ad supported. It uses pubCenter ad framework from Microsoft.
Looking at the Impressions (the number of times an ad has been seen by a user) graph we can see that the number of impressions had been on the rise from the release in January all the way through May.

The eCPM (dollar amount per 1000 impressions) graph elucidates the mystery. It clearly shows that Microsoft has been negatively tweaking the payout rate since February.

Conclusion
GGCalc has surpassed all Ania’s and my expectations from the user adoption rate perspective. The goal was to get familiar with WP7 platform and in the process maybe even create a useful app. I we have accomplished the mission.