App Hub has gone through a major upgrade couple days ago. Today, I wanted to submit an update to my Windows Phone 7 App Rank app. This process used to take less than 10 minutes. With the new upgrade, it took significantly longer because of the issues I have encountered during the submission process.

During the first submission step after uploading the file to App Hub, the validation process failed with the following message:
The [NeutralResourceLanguage] attribute is missing on the entry assembly. (2003)

The resolution to the issue consists of adding the following code to AssemblyInfo.cs

Initially, I had added [assembly: NeutralResourcesLanguage(“en-US”)] which caused another validation error:
An update cannot support fewer languages than the previous app instance supported. (1047)

Once I switched the Neutral Language from “English (United States)” to “English” the app passed validation. 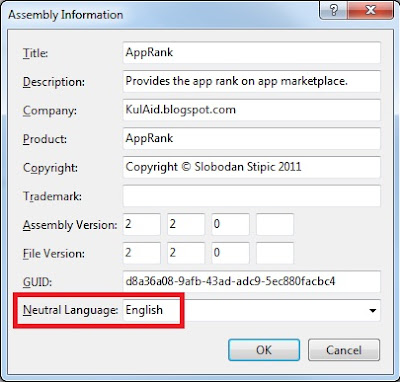 The last error I have encountered was the most frustrating. Clicking the submit button at the last step of the submission process popped up a grey screen with the following error:
Description missing
Keywords missing

The resolution involves deleting the entire submission whether it is a new app or an app update and starting the process all over. This workaround was provide by an App Hub developer here.
My recommendation to everyone is to wait few days for App Hub issues to get iron out before submitting apps.