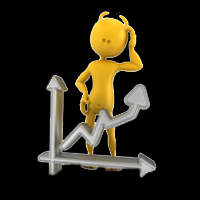 Publishing a Windows Phone 7 app to marketplace is an exciting exercise. It provides a sense of accomplishment. Gauging the level accomplishment is based on number of app downloads and the app ranking in marketplace.

Even after the upgrade, App Hub provides limited information such as number of downloads (6 days behind) and the crash count. It does not provide the app ranking. Luckily, there are plenty of apps in Marketplace that do provide ranking as well as user rating and reviews of the app. Unfortunately, none of these apps provide the real-time data. What makes these type of apps even less useful is the fact that they provide the ranking in US marketplace only.

I recognized the deficiency as an opportunity to create the app conveniently called App Rank. App Rank distinguishes itself form other apps by providing real-time marketplace rankings on all 18 marketplaces. Not only does it provide overall ranking, but it also provides the ranking within the app category such as entertainment, social, eduction, etc. The complete list of app stats is as follows: 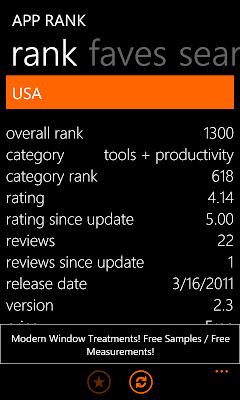 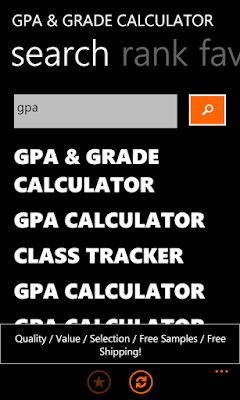 Certain marketplaces may be irrelevant to some apps. Therefore, there is no need to query those marketplace. App Rank accommodates those cases by providing ability for a user to disable irrelevant marketplaces. 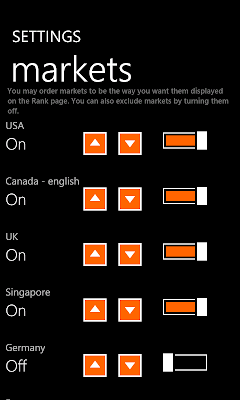 Conclusion
If you are a developer and have an app in the marketplace, App Rank is a must have app. Once you install it, you will always know the real-time app ranking at all 18 marketplaces.

See the app in action